The practice of polygraph screening of employees before and during employment has been widespread throughout the last century. The practice has been used to keep high risk individuals out of positions of power where a high degree of trust in the employee is required. Screening practices are most commonly used in the industries of the defense, intelligence, law enforcement, and emergency services. The United States Department of Defense alone conducts on average 8000 counterintelligence polygraph examinations yearly. The practice is used in Canada in the Canadian Security Intelligence Service, the RCMP, the Calgary Fire Department, the Calgary Police Service, Emergency Communications Officers and some municipal government positions.

Concerns have been raised about the lower accuracy rates in multiple issue screening examinations as well as the lower base rates of deception in the screening population. Effective use of these techniques is to use them to screen out employees from an applicant population or to qualify negative results for further testing. It is not proper practice however to use the results of these types of examinations to make a decision of whether an act occurred for that examinee. This process is improved by what is known as a successive hurdles approach where in an examinee who fails the screening examination may be requested to do additional more specific testing.

The issues included on a screening examination can vary but common topics will include drug use or distribution, criminal history, formal workplace discipline/termination, violent behaviors, workplace theft, bribery or falsifying or omitting information on the application documents.

A very underestimated value of polygraph screening is the deterrent value. The effect that knowledge of a Polygraph examination included in the application process deters certain individuals who would fail the examination from applying for the position. Just the same is true about periodic screening as it deters the current employees from committing the acts in which the examination screens for.

Originally validation studies were scarce. In the last 30 years a few screening techniques have had validation studies that show their accuracy. One Such technique is the Directed Lie Screening Test. The DLST was developed by the Department of Defense as the Test for Espionage and Sabotage. The test was then adapted to use for pre-employment and employment screening purposes.

The Directed Lie Screening Test was validated by both 7 position scoring and Empirical Scoring System methods. The average accuracies were 84.4% and 85.8% respectively with inconclusive rates of 8.8% and 9% respectively. The studies totaled 326 confirmed cases and an additional 300 Monte Carlo iterations. 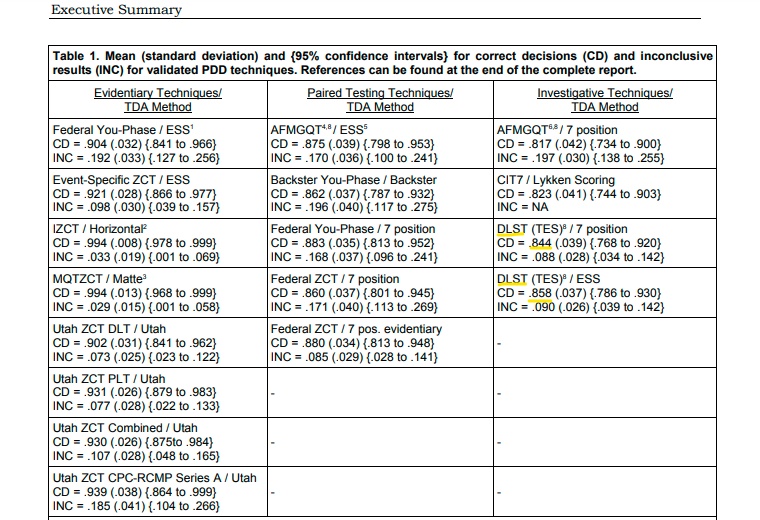 *Table from the Meta-Analytic Survey of Criterion Accuracy of Validated Polygraph Techniques, a report prepared for the American Polygraph Association Board of Directors (2010-2011)

This process can be used to protect your business as well as ensure that you are getting the most qualified and trustworthy applicants considered for a position.

At Anavaino Professional Lie Detector Testing we offer the Directed Lie Screening Test to our clients.