Tiger Hill, known also as Surging Sea Hill, is a large hillock covering about 3.5 acres and only 118 feet in height. Climbing it, you will find a number of historical sites some of which can be traced back over 2,500 years to the founding of Suzhou. Although the hill is relatively small it has rich history. These are just some of the highlights of what to be found there.

In 496 BC during the Spring and Autumn Period (770 BC-476 BC), He Lu, King of the Wu State perished during the war fought against the Yue State. His son buried him on the hill and three days after the funeral a white tiger came and sat upon the grave as though guarding it. From that time on it has been known as Tiger Hill. 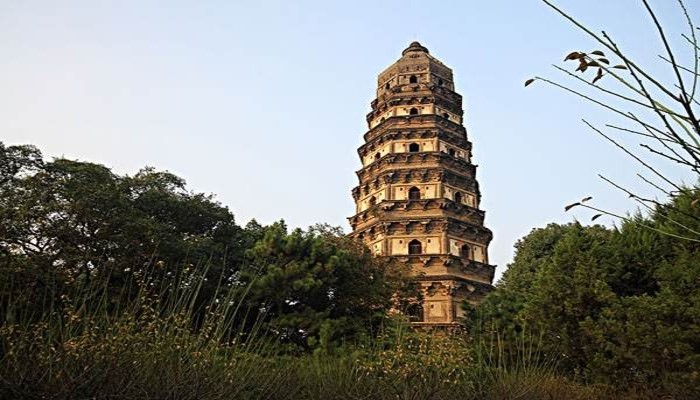 The pagoda stands on the hill’s summit and is the Pagoda of the Yunyan Temple. As the oldest pagoda in the vicinity of Suzhou it has come to be a symbol of the city and has the distinction of being China’s Leaning Tower. Built during the Northern Song Dynasty (959-961), it is a seven-storey octagonal tower following the style of the timber pagodas built during the early Tang Dynasty (618-907). It is 158 feet high and for the past four hundred years has leant 3.59 degrees to the northwest.

King He Lu was a zealous collector of rare swords and it is said that he tested them upon this stone. The crevice thus made in the rock is the only evidence of the existence of these swords, as it is believed that they were buried beneath the Sword Pool as funerary objects. Another mystery that surrounds the tomb is the whereabouts of the remains of the 1,000 workers who built it and who were put to death upon completion of the task.

Built in the tenth year of the reign of Emperor Guangxu of the Qing Dynasty (1644-1911), the villa is a masterpiece of the splendid gardens for which Suzhou is so famous. As the only garden without lakes or pools in Suzhou, the villa distinguishes itself from others. It was constructed according to the outline of the hill with exquisite pavilions, paths, and decorated by luxuriant woods and flowers. The Verdant Mountain Villa was designed so that it embraced the natural vistas and views from the halls and porches, which are the most pleasing to the eye.

The ancient art of bonsai tree growing originated in China and there are hundreds of magnificent specimens on display at this villa. Many of the specimens you can see have been awarded prizes in prestigious bonsai competitions. The miniature replicas of full-sized gardens are sure to amaze you and will give an insight into the skill and artistry of Chinese master gardeners that has been handed down from long ago.

There can be little doubt that Tiger Hill is a wonderful sight with its leaning pagoda, waterfalls and landscaped paths. It is hard to believe that it was man made to be the cemetery of king but this is yet another part of the wonder in China Tour Package, a land that will never cease to amaze and enthral the visitor with its heritage.